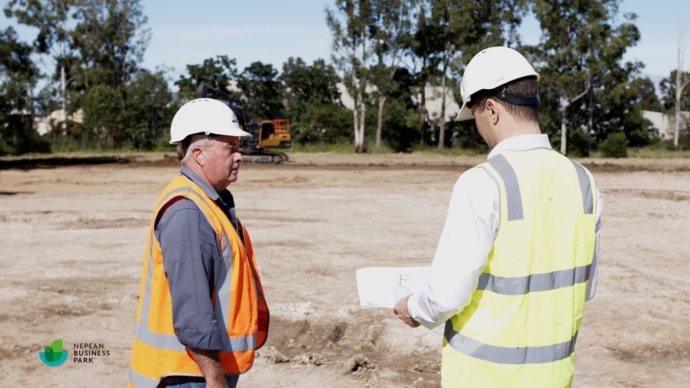 The business park is set to create more than 18,000 direct and indirect jobs.

Mr Ayres and Mr Fowler made their announcement separately in compliance with social distancing requirements caused by the Coronavirus pandemic and cancellation of a planned ‘sod-turning’ business and media event.

This followed the formal signing of a contract with Penrith-based Baker Group to undertake stage one rehabilitation works.

Rehabilitation works on a 47ha former quarry site adjacent to the Sydney International Regatta Centre and the North Penrith employment area is expected to take 18 months to two years to complete before building construction work starts.

The project is expected to cost $613 million and will generate $2 billion in economic activity during construction. Once operational, the Park will generate $295 million in wages and contribute $500 million annually to the Penrith economy.

“In these times, good news is particularly important when it comes to business and jobs creation. This is a critical project that is starting at a critical time and it’s important we record the commencement,” Precinct Capital Project Director Dylan Baudinet said.

Mr Ayres said he was delighted Precinct Capital was making great progress with the Nepean Business Park Project to establish the groundwork for future business and jobs creation.“Right now – probably more than any other time in our life, we need to be looking to the future and to do so optimistically,” he said.

“It’s investments like the Nepean Business Park which will allow us to approach that future with confidence knowing there will be billions of dollars coming into Western Sydney. This is about creating more jobs closer to where people live.”

Mr Fowler congratulated Precinct Capital on its investment in Penrith and commitment to expand the Great River Walk as part the firm’s community benefit contribution.

“What is going to be developed out at Nepean Business Park is something exceptional. It will be a great asset for the city. More importantly, there will be 2.2ha of open space dedicated to the city and this will form part of the Great River Walk which is linking the city to the lakes and beyond,” he said.

The local business community has also reacted favourably to the start of work on the new project, with Gai Hawthorn, CEO of the Penrith CBD Corporation stating the project was a big boost for business and jobs.“The Nepean Business Park is a great initiative locally not only economically, but will help our employment status,” she said.

“We’re really excited for the Nepean Business Park to start especially at this time when globally things are tough.”

Penrith Valley Chamber of Commerce President Simon Gould said the chamber has “been supportive of this project right from the very beginning”.

“It’s going to generate jobs. It’s going to bring private investment into the area which is critical on the back of all the capital the Government are putting in. On top of all that, it’s being done in such a way that’s protecting green space and it’s making a contribution to the Great River Walk as well,” he said.

“This initial stage is exciting because it’s happening where we really do need to boost the confidence of local businesses.”

This article originally appeared on The Western Weekender.